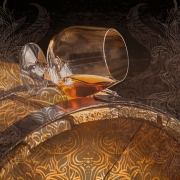 City of Industry, CA (July 8, 2015) – At the 2015 Sip Awards, the international spirits competition where 423 spirits were taste tested by the consumers themselves, Deadhead® Rum took home both a Gold Medal for its Amber Rum and a Platinum Medal for its bottle design, qualifying the brand to enter the 2016 Consumers’ Choice Awards. Held in Newport Beach, CA, the Sip Awards are in their seventh year.

Deadhead® Rum is double-distilled in small batches and aged in European oak barrels for six years. The end result is a rich amber hue and a palate of coffee, chocolate, allspice and cinnamon, housed in a bottle based off a tsantsa—the shrunken head of an enemy kept as a trophy.