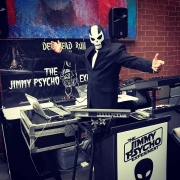 The world’s only spook/sci-fi, punk-rock lounge act joins the Deadhead Rum family as a partner and brand ambassador for Deadhead Rums.

Deadhead Rum is hitching up the Bamboozle travel trailer and rum-running across state lines for the rest of 2021 celebrating its 10th Anniversary as a company with the release of its 10-year-old limited edition rum. This rum is as smooth as a baby’s butt having rested in American oak with Chiapas oak for the past 10 years. It is rich, full-bodied with a whiskey-style nose of stone fruit, maple syrup, and vanillin. The flavor is intense. Real intense.

Jimmy will be promoting the introduction of Deadhead Rum and Deadhead Dark Chocolate Rum in his home state of Ohio through sponsored performances, and will be part of the Deadhead Coast-to-Coast Anniversary celebrations in New York and California.

So grab your tiki mugs and don your favorite aloha attire because the road goes on forever and the party and the swag never end.