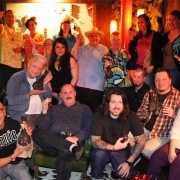 When we created Deadhead Rum in 2011, we did so because we wanted to bring deserved attention to, and honor to, the storied history of rum production in México.

After all, since the 18th-century, sugarcane has been a major crop in México and rum is a national beverage. Today, México has more sugar mills than any of its Caribbean neighbors.

Last year, México produced 56.8 million tons of sugarcane making it the sixth largest producer in the world. And while México is internationally known for its tequila and mezcal, the fine rums coming out of México have gone largely unnoticed by the world rum scene.

At Deadhead Rum, we set out from the beginning to change that global neglect. Starting with partnering with the most-awarded distillery in México, Rones de México, a family-owned artisanal distillery that’s been making handcrafted exceptional rum since 1948. Its master distiller, Jorge Perez Rafael, is the most decorated distiller in México.

And while we had just the right distillery and master blender, we didn’t wish to put our fine rum in just any common bottle. We wanted our bottle to stand out on shelves and get noticed. And we wanted our bottle to represent a cultural connection to the history of the State of Chiapas. The shrunken head pays tribute to Mayan rituals of family protection, triumph, and honor in the Chiapas region.

We were honored as well when The Tasting Panel gave Deadhead Rum a 95-point rating and our Deadhead Dark Chocolate Rum a 92-point rating.

To celebrate our ten years of commitment to making the very finest rum and putting Méxican rum on the map, we asked our master blender Jorge to create a 10th Anniversary Limited Edition Deadhead Rum and disappoint us he did not.

The Deadhead 10th Anniversary Rum is extraordinary. This elegant 80-proof spirit features a whiskey-nose of stone fruit and maple syrup. Brown sugar melts on the tongue, followed by cigar-leaf and sassafras. Toasted pecan and oatmeal drive even more textural complexity. Oak and leather are magnificent on the finish, which exudes pure depth of character.

It Takes a Village

For us, the past ten years have been an exciting (and certainly challenging) ride. And although we knew we had the finest rum and outstanding packaging (winning dozens of medals including Gold and Double Gold for taste at the Craft Competition International Awards, Wine & Spirits Wholesalers of America, BTI and Sip Awards and a Platinum Medal for bottle design at the Sip Awards) it hasn’t been a cakewalk in the hypercompetitive spirits marketplace.

We are a small, family-owned company competing against the deep-pocketed global rum marketers producing oceans of rum from  better-known rum countries such as Barbados, Jamaica, and Cuba.

But like the shrunken head ritual of Mayan civilization, we have empowered ourselves with the spirit of our global rum adversaries and market challenges and are finding creative and committed ways to put Deadhead Rum and the Méxican rum industry front and center.

Even though Deadhead Rum started 10 years ago, facing the slings and arrows of uncontrollable variables such as distribution disruptions and a global pandemic, in some ways we feel born again. The new kid on the block. We’re back and we’re not going away.

This year we have reopened 24 markets in the US, and reopened Australia, and added the UK, Israel, South Africa, and Singapore expanding our footprint to 38 countries. From the nadir to the greater, sales are back up to over 40,000 cases.

It may take a village to raise a child but it takes a whole lot more people to raise a successful global rum brand. We would like to thank everyone in this crazy business for making Deadhead Rum a success and an even greater success going forward.

Starting with our own tribe, which we call the Tiki Council – those spirited cheerleaders both inside and outside the company who shout our message of authenticity and commitment to excellence every day.

And of course from our tireless distributors and loyal wholesale accounts to our enthusiastic bloggers, media supporters and on-premise devotees, without whom our renewed growth would not have been possible, we thank you all for making us 10 years strong. The spirit lives on.

Because these cookies are strictly necessary to deliver the website, refusing them will have impact how our site functions. You always can block or delete cookies by changing your browser settings and force blocking all cookies on this website. But this will always prompt you to accept/refuse cookies when revisiting our site.

If you do not want that we track your visit to our site you can disable tracking in your browser here:

The following cookies are also needed - You can choose if you want to allow them: