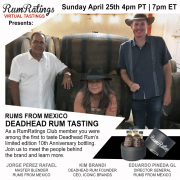 As Eduardo said after tasting the 10th Anniversary Limited Edition rum, “this rum has been resting in American oak with Chiapas oak for the past 10 years. It is rich, intense, full-bodied, redolent with a whiskey-style nose of stone fruit, maple syrup, and vanillin.”

We couldn’t agree more. And we think you’ll agree this is the finest rum we’ve ever made when you taste it, which you can right now if you go to RumRatings.Com and preorder a bottle today.

If you were one of the RumRatings members that have already tasted the 10th Anniversary Limited Edition Rum then you know how good this rum is. Let everyone know how good it is by posting your rating on RumRatings.Com where, if you sign up for a free account and rate Deadhead Rums, you’ll be eligible for a special discount rate just for doing so.